Few other sights shout “SPRING’s COMING!” better than  Daffodowndilly does with it’s bright and cheerful bloom. And she has done so since the beginning of time. Species of the Narcissus genus have been part of the landscape in the Iberian peninsula in south western Europe, for million’s of years. Both wild and cultivated plants have naturalised widely, and we know that some were introduced into the Far East prior even to the tenth century. Hence history reveals that Narcissi have been cultivated from the earliest of times, for medical as well as botanical purposes.

The word Narcissus is said to come from the Greek Narkao; meaning “to be numb”, one of the medicinal properties assigned to this bulbous plant. 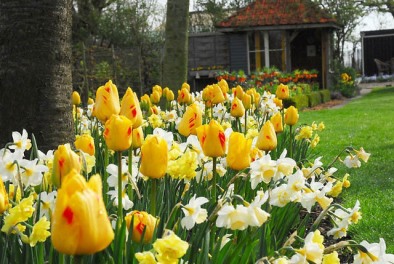 Technically the large trumpet flowered Narcissus are usually referred to as Daffodils and Jonquil is a particular sweet smelling variety but people have used the names interchangeably for many years.  Daffodills became increasingly popular in Europe after the 16th century and by the late 19th century they became an important commercial crop, primarily centered in the Netherlands.
Narcissi are popular as cut flowers and as ornamental plants in private and public gardens. The long history of breeding has resulted in thousands of different cultivars. Most species are spring blooming but there are a few fall blooming varieties of which the Paperwhites are best known. Click here and here and here for other blogs on fall blooming  Narcissus.

Preferring a place in the sun but also adaptable to a little light shade, Narcissus is an easy plant to grow for any North American gardener, except maybe in Florida. The flowers are rather conspicuous, consisting of six petal-like tepals surmounted by a cup- or trumpet-shaped corona, sprouting from a clump of smooth stems and leaves. The flowers are generally yellow or white, or a combination of the two but can also be orange or pink in some newer varieties. Different cultivars can sprout up anywhere, usually producing one flower, but some varieties produce anywhere from one to a multitude of flowers, up to twenty!

These perennials bulbs are excellent for planting under trees. Some large gardens feature hundreds, and hundreds of Daffodils in a woodland setting, painting the floor in sunny colors. Smaller gardens often use this flower for clumps between shrubs or (later blooming) perennials. They can be incorporated in garden beds as well as pots, either for blooming outside in Spring or for forcing early blooms as an indoor harbinger of Spring.
Best to plant bulbs 1-½ to 5 times their own depth. Where winters are severe, make sure there is at least 3 inches of soil covering the bulb.
Daffodils will tolerate some crowding but prefer to be spaced 3 to 6 inches apart. If the weather does not deliver the needed rain during their blooming season, they appreciate a drink of water.
Rodents know to stay away from these bulbs so some gardeners mix a few Daffodils to their bulb mix, this will deter the rodents from feasting on your flower bulbs.
After blooming, allow the plants to grow until they die off. They need time after blooming to store energy in the bulbs for next year, so don’t cut the foliage until it has withered. This is a good time to add some bonemeal to  the soil around them for next year’s blooms.

The first thing to know about using Daffodils in floral designs is the fact that these stems ooze a clear, stringy liquid that often clog other cut flower stems in the same arrangement, unless they are conditioned properly. So before you arrange these sunny beauties with other flowers, they should sit in a separate bucket for several hours (at least 6 hours) and let the liquid drain from the stems. When arranging, try  not to cut the stem again. If you do need to cut the stem again, drain it again until the oozing stops.
A common dermatitis problems for florists, “daffodil itch” involves dryness, fissures, scaling, and erythema in the hands. It is blamed on exposure to (calcium oxalate in) the sap.
Having said that,  Daffodils are a treasured addition to any early Spring bouquet, at a time of year when humanity craves sunny colors and cheery sights, this flower delights all kinds. Often seen arranged with simple bare branches, or any of the blooming fruit tree branches,  Tulips, Leucojum, Hyacinths. These are all good companions for Narcissus that bloom at the same time. Simple added to some cool greens or tucked into colorful spring bouquets, Narcissus brings out the sun in an arrangement. She can also stand all on it’s own and shine in a elegant vase or simple jar, whatever is on hand.

Daffodills have long been considered the flower of chivalry, nowadays  the meaning is lasting friendship. Also rebirth, new beginnings and faithfulness can be the message when someone gifts this radiant flower.

In Greek mythology, Narcissus was born to the nymph Liriope and fathered by the river god Cephissus. As a child he was adored by all, as he was a particularly beautiful child. Growing up, so admired for his looks, had it’s consequences for young Narcissus as this adoration did not benefit him but instead made him scornful to all who adored him. His parents grew worried about their child and inquired the prophet Teiresias what to do about Narcissus future? Teiresias saw into Narcissus’ future and answered that the boy would grow old ‘only if he did not get to know himself’. Narcissus grew into a handsome hunter and he attracted many admirers, including the nymph Echo, who fell madly in love with him and followed him into the woods. Handsome Narcissus soon became aware of someone following him and  sneered at the Nymph to leave him alone, he had no feelings for her and ridiculed her for her love for him. Echo was heartbroken and spend the rest of her life in glens until nothing but an echo sound remained of her.

Nemesis, the goddess of revenge heard of Echo’s ordeal and decided to punish Narcissus for his callousness. She lured him to a pool to drink some water and for the first time in his life Narcissus saw a reflexion of himself and instantly fell in love with his own image. To possess that beautiful image in the pool became a burning but unattainable desire and it is unfortunate to learn that this handsome hunter was not able to stop gazing onto his own reflexion. His desire bound him to the water’s edge until he prematurely died from sorrow.
When his family tried to retrieve his body, they could not find it anywhere but instead found a clump of Daffodil flowers, precisely in the spot where Narcissus’ body had slipped into the watery underworld, where, it is said, he still gazes onto his own reflexion.

Herbal and Culinary Use
The plant is poisonous, all Narcissus varieties contain the alkaloid poison lycorine, mostly in the bulb but also in the leaves. There are no culinary uses for this plant, however more than once was this plant mistaken for an union and victims of this error have suffered, sometimes severely. This is how people found out that the poison was swift and the heath of cooking did not weaken the effect of the poisonous properties. Merely chewing on the stem may be enough to cause a chill, shivering, and fainting. Daffodil can cause irritation and swelling of the mouth, tongue and throat.  Daffodil can also cause vomiting, salivation, diarhea, brain and nerve disorders. In extreme cases lung colapse and even death. 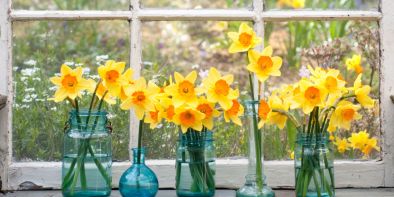 As a medicine, Narcissus has long roots.
The bulb is the main ingredient in Narcissum, an ancient ointment that was used for joint pains and strains, skin wounds and burns, also the drawing out of thorns and such.

the powdered flower is said to possess emetic, cathartic, antispasmodic, and narcotic properties. It has been used in epilepsy, in hysteria, and other spasmodic affections.

Narcissus is also being studied as a medicine for Alzheimers disease.

In Homeopathy this remedy has been used in the treatment of bronchitis, coryza, diarrhea and whooping cough.

I am a florist and urban flower farmer, I grow my flowers sustainably in underused and neglected areas in my North Portland neighborhood. I make floral designs for all sorts of occasions and also peddle flowers at the flower market. View all posts by Marianna

This site uses Akismet to reduce spam. Learn how your comment data is processed.